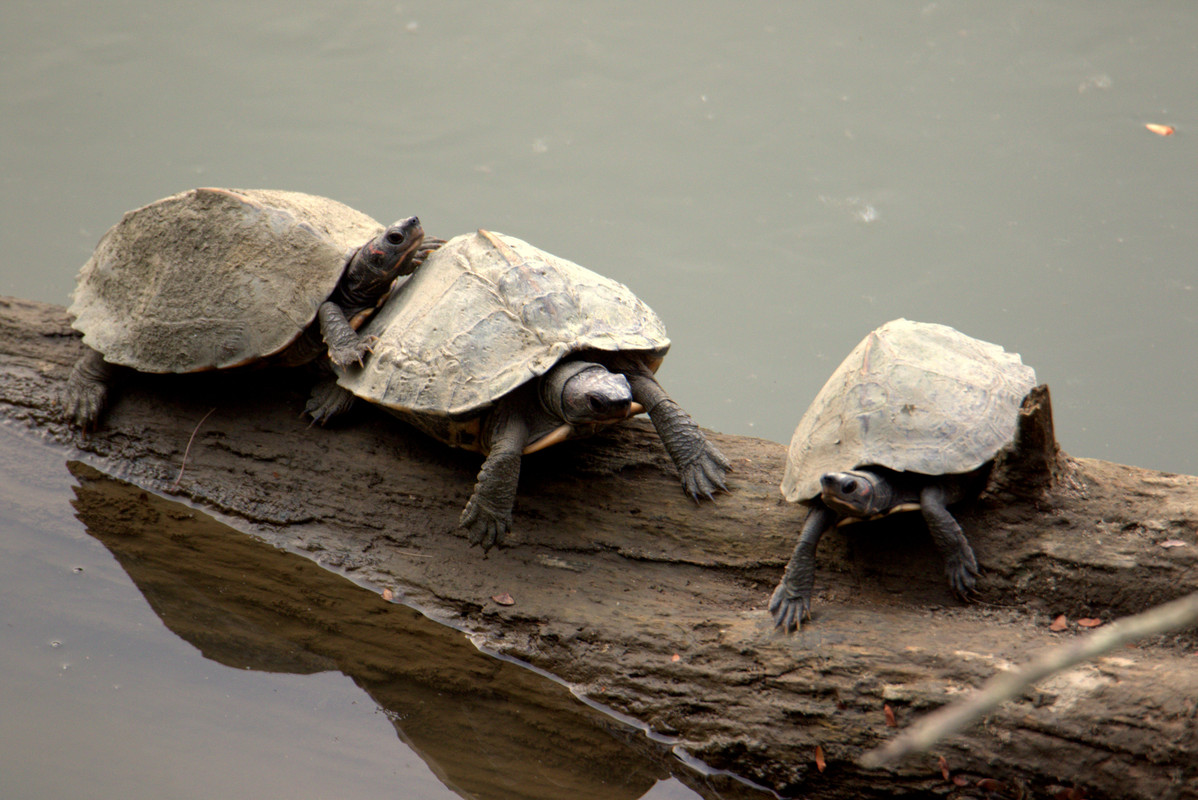 On safari in the forests and grasslands of Kaziranga National Park. (Cont. from Part 1)

All except one animal, one which no one talked about but was up there on the bucket list of animal sightings. If the park and all its animals is the cake, the Royal Bengal Tiger is the icing, the cherry and the candles. In our briefing in the morning, I had told my guests the exact same thing. True to their word, they hadn’t talked about tigers during the course of the safari and I knew that it was on everyone’s mind, just like it was on mine. So we drove to a watchtower overlooking a massive ‘beel’ or water body and a good place to spot tigers in the evening. 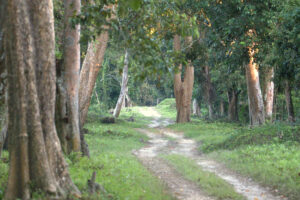 After spending a fair bit of time on top of the watchtower scanning the areas around the ‘beel’ with several binoculars and even more eyes, we noticed we were the last vehicle left at the watch tower. Reluctantly, I told the guests that it was time to head back as the sun had already dipped below the horizon and very soon it would be too dark to drive. As we all bundled into the vehicle, all that remained was beginners’ luck!

Driving back after a successful safari is one of the most satisfying feelings. When one is on safari, time usually is inconsequential, except that as it always does, passes by way to quickly for most of our liking. 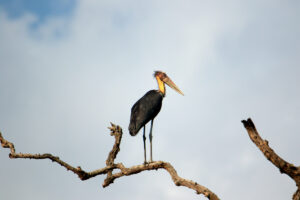 That’s actually true in the case of most things we enjoy doing. As we bounced along the jungle track each of us lost in our own thoughts, our driver quietly tapped me on my shoulder and pointed to something on the track a little distance away in front of us. It was too far to make out which animal it was and before we could get the binocular on it, it ran off into the tall grass bordering the elevated track.

A quick exchange of glances later, our driver drove to the spot. Whatever it was was long gone but we decided to wait a while. Balancing precariously on the roof of the vehicle, we scanned the grasslands to our left. And then it came, the alarm call of a Hog Deer. And then another and soon we had a whole chorus of calls!

We could see the deer and there were about 15 of them. They were in an elevated glade about a hundred yards to our left and they were calling incessantly. With all eyes trained on the glade to our left, our driver suddenly noticed an animal walk into the glade from the grassland to its right and immediately called ‘Tiger’! 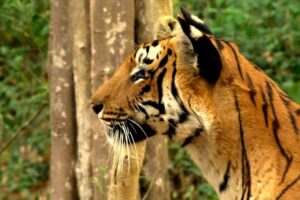 The sight of a tiger is always a shock and no matter how many times one has seen a tiger in the wild, the excitement levels soar through the roof. I looked back at my guests and they were all in different stages of shock. But they were giddy with excitement at the prospect of having seen a tiger. The tiger walked out into the glade and sat down and then to our complete amazement, out walked two cubs from the same spot the tiger had just emerged. This is was unexpected but very welcome. The cubs walked up to their mother sat down on either side of her. Very soon the cubs got impatient and started playing with each other. They chased each other around the glade, reared up on their hind legs striking out at each other in a mock fight. It was classic tiger behaviour and there were many ‘oohs’ and ‘aahs’ as we took all this in.

The deer were standing about in a semi-circle, stridently voicing their alarm calls and every time the cubs got too close, they would scatter in panic into the tall grass. But they always regrouped in that semi-circle and kept watching the tigers. Keeping track and sight of one’s mortal enemy is the best form of defence and the deer obviously had this lesson ingrained in them. This lasted for a few minutes and then the tigress stood up and walked into the grassland and her cubs followed suit.

As we drove back to our safari lodge, the tiredness from the day’s exertion was all forgotten and nobody could believe their luck and were jubilant having seen their first tiger in the wild and that too, a sighting very few are privileged to see. It reminded me of something I was told a long time ago by a wizened old man of the jungle, “the effort is ours, the luck is yours”.

On safari in the forests and grasslands of Kaziranga National Park

It had been another one of those days a wildlife traveller is so well accustomed to. The day had started with a sparkling sunrise, spreading warmth amongst us, the bundled-up lot! We had been driving around the jungles of Northeast India’s famed Kaziranga National Park and Tiger Reserve, scouring every single nook and cranny for the park denizens and we still hadn’t had our fill. Call it greed or just good old hope, we were determined to make it a memorable jaunt into the jungles.

But, now as the shadows grew longer and the light iffy and for those of us who were carrying long telephoto lenses, a little bit of despair and a lot of the winter chill was creeping in. 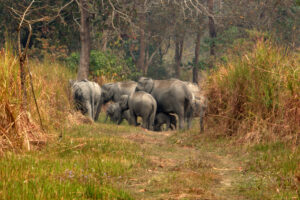 Coffee, strong, black and slightly tepid helped restore our spirit and we decided to give it one last shot. We had seen a lot of animals on both our safaris of the day. Kaziranga, famous for the Indian One Horned Rhino, hadn’t disappointed us. They were everywhere!

Prehistoric in appearance, the rhinos tend to spend most of their time grazing in order to fuel their massive size. One doesn’t realise how big a rhino really is until it gets close to the safari vehicle. Some of them are almost 6 feet in height and as long as the vehicle.

With that size, they’re certainly not to be trifled with. While grazing, they occasionally look up, use their ears which swivel almost to 360 degrees as radars to take stock of the situation and then get back to their favourite pastime. 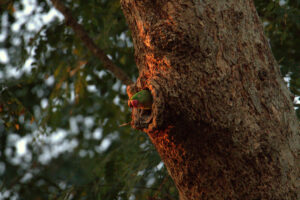 In existence for over a hundred years now, Kaziranga is a safe haven for these unique animals and while there are occasional cases of poaching, the forest department does provide yeoman service on their behalf. Not an easy task in the vastness of these jungles! We had seen elephants in the morning. They were all milling around a water body, drinking their fill while the younger ones in the herd found it to be an opportune moment to indulge in a game of ‘chase’. As I pointed out the dynamics of the herd, usually led by a female elephant, the guests got busy clicking their memories.The whirr of the cameras didn’t seem to bother them one bit as the youngsters gambolled about while the adults caught up on pressing family matters.

They regarded us with a sense of nonchalance while keeping a watchful eye on our every move. The ‘flankers’, two young and yet, massive bulls stayed on either side of the herd and grazed and it was only after every single elephant had had its fill of water and had moved off into the tall grass, did they leave their positions and come down for a drink. Their intelligence is second to none in the animal kingdom and we felt they mirrored a lot of what we humans call ‘the protective instinct’.

Situated on the fertile alluvial grasslands banks of the Brahmaputra, Kaziranga National Park owes its existence to Baroness Mary Curzon. While on a tour of the region in 1904, she was very disappointed to have not seen a single Rhino. 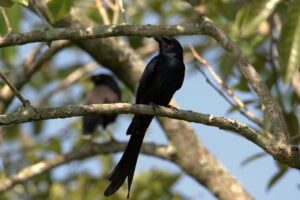 Not one to take things lying down, she decided to take up matters with the highest office in the land in those days, her husband, Lord Curzon who incidentally happened to be the Viceroy of India.

It was at her behest, Lord Curzon very wisely set up Kaziranga Reserve Forest on the 1st of June 1905 with an area encompassing 232 square kilometers. Over the years the size of the protected area grew to its present size of 432 square kilometers and Kaziranga was accorded the status of a National Park in 1970 and a Tiger Reserve in 2006. 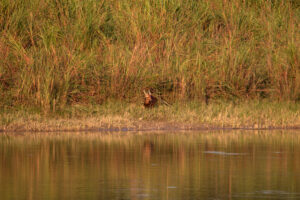 Kaziranga has become a haven for birds and animals of all kinds. On our drive in the first half of the day, we encountered several birds, several of which were ‘lifers’ or a never seen before species for the guests. The Bar Headed Geese were down in droves as were Whistling Teals flying in from the high plateaus and mountains of Tibet, Mongolia and Russia to spend their winter break in the milder climes of the Indian subcontinent.

The Bee-Eaters were around, gliding about on their muslin fine transparent wings as were the raucous Rosy Ringed Parakeets. Life was abundant and was all around us and we had been witness to some wonderful animal behaviour in the wilderness. 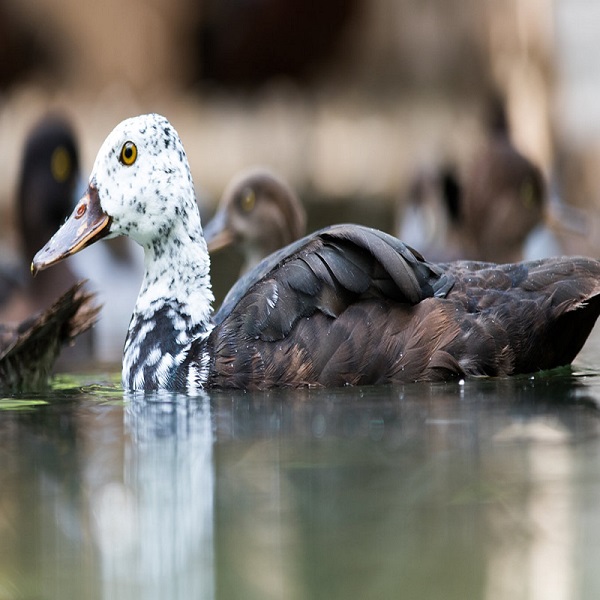 We have often been asked about why we call ourselves White Winged Journeys. Is it a reference to a flight of fantasy or is it just a name that’s got somewhat of a ring to it? Well, we’re glad that people allude to it as such but actually, we’re named after a bird, a duck to be precise.

We get our name from the White Winged Wood Duck. A type of duck that is one of the most critically endangered birds in the world. Once widely found across the landscapes of North East India through South East Asia and on to Java and Sumatra, the White Winged Wood Duck now struggles for its survival. Reports estimate that there are only about 800 left in the wild today with about 450 of them to be found in the dense tropical evergreen forests of North East India, Burma and Bangladesh. 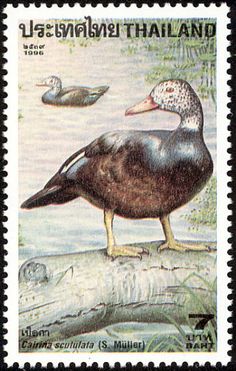 With a black body, a thickly spotted white head, white patches on the wings and orange-ish red eyes, the White Winged Wood Duck is amongst the larger ducks found in the wild. Their favoured habitat is in the midst of dense tropical evergreen jungles in secluded marshy river areas and jungle pools making them a very difficult bird to spot.

Found in the North East of India in the states of Assam and Arunachal Pradesh, these are some of the most sought after birds to catch a glimpse of. The duck has a ghostly call and in Assam it’s called ‘Deo Haan’ or ‘Spirit Duck’. In fact, such is its significance to the Assamese culture; it’s the State Bird of Assam! A part of our mission as an ecologically conscious travel company in these beautiful lands is to bring to light stories that are not often recounted. The story of the White Winged Wood Duck requires to be told, to be brought into greater consciousness. And if we can tell this story in our own small way, we’re only doing our duty.